When Phones Were Fun: The Xelibri Experiment (2003)

0 Просмотры
Imagine sitting down to breakfast with one of the biggest companies in the world and being told this:

“We need to do something bold, something nobody expects. I will give you a budget, personnel, marketing, products, prices and distribution. All I want from you is to go out and change the world!”

The year was 2002, the place was Munich’s Hotel Bayerischer Hof and the man with the sweet ‘stache was Rudi Lamprecht of German tech giant Siemens, whose mobile division was at the time the world’s fourth-largest cellphone maker. The man on the other side of the table was George Appling, an American consultant whose acceptance of that offer would lead to what he once called “the greatest job imaginable.” Appling’s team would go on to build a family of cellphones unlike any the world had yet seen (promoted by a set of commercials the likes of which I hope never to see again)!

But just two years later, this journey into “tomorrow” would be cut short – and a year after that, with its phone division losing 1.5 million euros per day, Siemens abandoned a twenty-year legacy and left the mobile space entirely. This is the story of some of the weirdest cellphones the world has ever seen: the story of Xelibri.


[ABOUT WHEN PHONES WERE FUN – SIEMENS XELIBRI]

This is the eleventh in a series of MrMobile videos exploring the mobile tech world's most vibrant period in design and experimentation. In “When Phones Were Fun,” Michael Fisher re-reviews cellphones from the golden age of mobile, the decade-long span from the turn of the century to approximately 2009.

When Phones Were Fun: Episode 12 features samples from Siemens / Xelibri’s “Space on Earth” and “Fashion Extravaganza” collections of 2003, on loan from Valentinos Antoniades. Specific devices featured: Xelibri 2, Xelibri 5, Xelibri 6, Xelibri 7. No company paid a fee or otherwise offered compensation in exchange for this coverage, nor did any company preview or approve this content before publication.

BenQ Mobile – end of the story for Siemens [Mobile-Review]:
https://mobile-review.com/articles/2006/benq-siemens-end-en.shtml

Counterclockwise: the history of Siemens phones and their many innovations [GSMArena]:
https://www.gsmarena.com/counterclockwise_the_history_of_siemens_phones-news-32477.php

This post may contain affiliate links, which afford MrMobile / Future plc a commission if you make a purchase. See our affiliate link policy for more details: https://www.mobilenations.com/external-links

When Phones Were Fun: The Xelibri Experiment (2003) 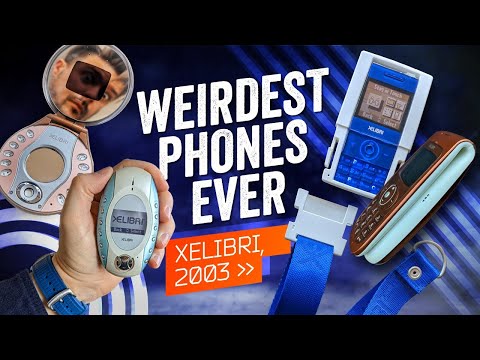 Imagine sitting down to breakfast with one of the biggest companies in the world and being told this: “We need to do something bold, something nobody ...