The warning to North Korea came during President Biden's very first press conference since taking office..
Among other things, the commander in chief said China wants to become the most wealthy, powerful country but that's not happening on his watch.
Han Seong-woo helps us read between the lines.

"Doesn't have a 'Democratic with a small D' bone in his body. But he's a smart, smart guy. He's one of the guys, like Putin, who thinks that autocracy is the wave of the future..."

At the White House on Thursday, local time, U.S. President Joe Biden compared Xi Jinping to Vladimir Putin during his first formal press conference since taking office.
While acknowledging China as a competitor, he went on to say the U.S. will maintain its position as the world's superpower... by greatly increasing its investment in science and technology.

Biden also reiterated his plan to convene a summit of democracies, where China's aggressive expansionism would be held accountable for its alleged mistreatment of the Uighur minority, as well as issues related to Hong Kong, the South China Sea and Taiwan.
The U.S. and Taiwan have just signed an agreement, establishing a Coast Guard Working Group to coordinate maritime policy.
This comes after China passed a law in January allowing its coast guard to open fire on foreign vessels.
Reuters reports that Taiwan is reinforcing its coast guard with new ships that can used by the navy in the event of war.

Meanwhile, Biden also announced the new goal of administering 200 million coronavirus vaccine shots by his 100th day as president... April 30th.
The original goal of 100 million shots by that time was met ahead of schedule.

"I know it's ambitious, twice our original goal, but no other country in the world has even come close, not even close to what we were doing. I believe we can do it."

According to news outlet Axios, the country's current 7-day average of about 2-point-5 million doses administered per day will lead to the U.S. reaching the 200 million-mark before Biden's 100th day in office.
Biden also said he expects to run for reelection in 2024.
Han Seong-woo, Arirang News. 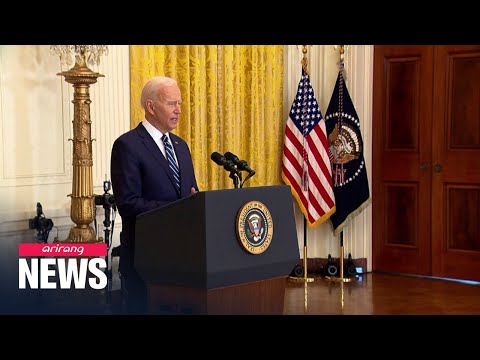