2 Просмотры
The Nuremberg trials began 75 years ago, as high-ranking Nazis were held accountable on the basis of international law. A look back by a Holocaust survivor, by the son of Hitler's deputy in occupied Poland and by the daughter of a defense lawyer.

In the final days of World War II, Adolf Hitler and his Propaganda Minister Joseph Goebbels committed suicide. But Hermann Göring, the Supreme Commander of the Luftwaffe, and other high-ranking Nazis were captured by the Allies and put on trial. The four wartime allied powers - the US, Britain, France and the Soviet Union - had already agreed to do this before hostilities ceased. As the first international tribunal to hold leading representatives of a state personally accountable for crimes under international law, the Nuremberg trials were groundbreaking in legal terms. But they also raised moral issues which rattled many Germans to their core. Niklas Frank had to come to terms with the fact that his father, Hans Frank, was going to be executed. Holocaust survivor Peter Gardosch mainly felt a sense of gratification. Renate Rönn - whose father was assigned to serve as a defense counsel - felt a sense of shame that Germans had committed such crimes, and that it was the Allies who ensured that justice was served, not the Germans themselves. Today, the Nuremberg trials are viewed as a milestone in international law that served as a model for the International Criminal Court in The Hague. Bettina Stehkämper speaks with Niklas Frank, Peter Gardosch and Renate Rönn about the proceedings and how the trials impacted their lives.

DW Documentary gives you knowledge beyond the headlines. Watch high-class documentaries from German broadcasters and international production companies. Meet intriguing people, travel to distant lands, get a look behind the complexities of daily life and build a deeper understanding of current affairs and global events. Subscribe and explore the world around you with DW Documentary. 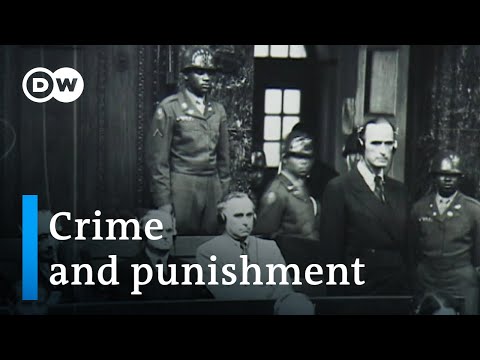 The Nuremberg trials began 75 years ago, as high-ranking Nazis were held accountable on the basis of international law. A look back by a Holocaust sur...