2 Просмотры
Scores of Armenians were fleeing the Nagorno-Karabakh region on Wednesday after the country's Prime Minister Nikol Pashinyan signed a ceasefire deal with Azerbaijan and Russia.

The declaration, announced on Monday night follows six weeks of heavy fighting in the contested Nagorno-Karabakh region, sparking fears of a wider regional war feared to have killed thousands.

The territory is internationally recognized as part of Azerbaijan but populated and, until recently, fully controlled by ethnic Armenians, who have been relentlessly pushed back by Azerbaijani forces.

Almost everyone had fled and the few who had remained are leaving now, said an Armenian woman who has lived in the region for 25 years, adding that she couldn't take all her belongings with her.

Rows of cars were seen passing through Kelbajar, an area formerly held by Armenia but now controlled by Azerbaijan.

Plus, a convoy of Russian peacekeepers reached the town of Susha in the Nagorno-Karabakh region on Friday and met with Azeri soldiers.

Turkish and Azeri flags were seen over a checkpoint in Susha, known by the Armenians as Sushi, which sits on a mountaintop overlooking Stepanakert, the city is regarded as the enclave's capital by its ethnic Armenian administration. 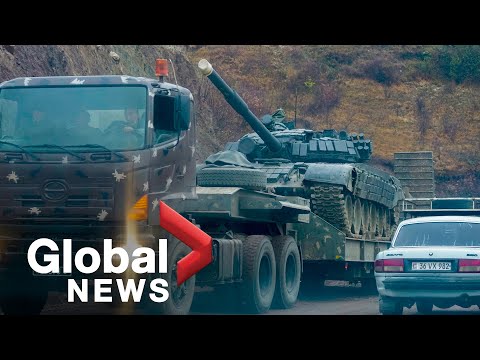 Scores of Armenians were fleeing the Nagorno-Karabakh region on Wednesday after the country's Prime Minister Nikol Pashinyan signed a ceasefire deal w...