CNNi: US calls for Russia to release Navalny immediately

0 Просмотры
A Moscow court sent Russian opposition leader Alexey Navalny to prison for more than two and a half years on Tuesday, prompting protests across the country. The ruling closed a heated hearing in which the Kremlin critic ridiculed claims he broke his parole conditions while recovering from poisoning, and denounced President Vladimir Putin as "Putin the poisoner."
Navalny was first detained two weeks ago upon his return to Moscow from Berlin, where he spent several months recovering from poisoning with nerve agent Novichok -- an attack he blames on Russian security services and on Putin himself,
The court on Tuesday ruled that while Navalny was in Germany, he violated probation terms from a 2014 case in which he had received a suspended sentence of three and a half years.
That suspended sentence will now be replaced with a prison term. The judge took into account the 11 months Navalny had already spent under house arrest as part of the decision.
He will appeal the verdict, according to his lawyer Olga Mikhailova. Speaking outside the courthouse after the sentencing, she said Navalny took the verdict "bravely as usual."
The verdict sparked swift condemnation abroad. US Secretary of State Tony Blinken called on the Russian government to "immediately and unconditionally release" Navalny. The UK, Germany, France and others issued similar statements.
It also inflamed anger among Navalny's supporters, who took to the streets in vast crowds on Tuesday night.
In central Moscow, protesters calling for his release were met with a show of force from authorities, as hundreds of riot police combed the vicinity of the courthouse street by street and forced individuals into waiting buses.
More than 1,000 people have been detained across Russia, according to independent monitoring organization OVD-Info.
Navalny's team later posted a message to Telegram thanking supporters and urging them to go home. "Putin failed to kill Alexey Navalny - and therefore decided to put him in jail for 2 years and 8 months. We will never tolerate a government that kills opponents and imprisons innocent people," it read.
"We will definitely take to the streets of the city again. For now just get carefully to the nearest metro station."

CNNi: US calls for Russia to release Navalny immediately 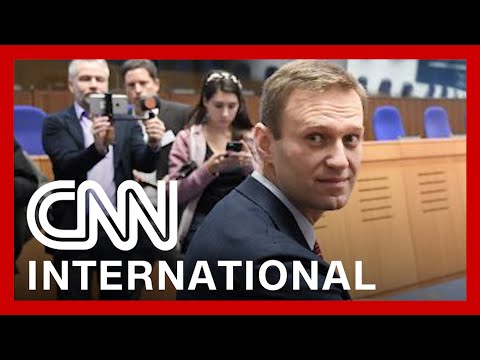 A Moscow court sent Russian opposition leader Alexey Navalny to prison for more than two and a half years on Tuesday, prompting protests across the co...